It is like something out of one of his sci-fi films: Iron Man star, Robert Downey Junior recently presented a real, bionic arm to 7 year old Alex Pring.

This is an artificial limb created using 3D printing technology via a Stratasys printer. Albert Manero, a #CollectiveProject student founded Limbitless Solutions to build 3D printed arms for people just like Alex, firmly believing that “no one should profit from a child in need of an arm”.

How 3D Printing Can Overcome The Limitations of Current Prosthetics 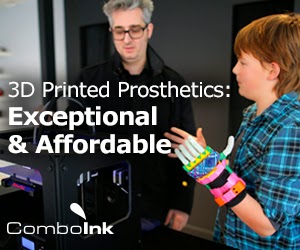 About one in 1000 kids are born without fingers. About 450 kids have a limb amputated due to an accident. State of the art prosthetics made the conventional way are expensive; an artificial limb costing an average of $40,000. While one could consider this a worthy investment for adults who will require the same sized limb for the rest of their lives, the same could not be said for growing kids, for whom such a large outlay could not be considered practical. 3D printed limbs make so much more sense when you contrast them with conventional prosthetic limbs such as Alex’s bionic arm which cost about $350 in raw materials.

Another case in point is that of 12 year old Wyatt who has autism; who had his right arm amputated right after birth. He had requested a Blue Man themed robotic arm; Limbitless made it happen in conjunction with the Blue Man Group.

So clearly this emergent technology offers hope to kids who have congenital problems or have had to undergo amputations for whatever reason. Parents have fresh hope from a viable, affordable solution for kids who need a prosthetic limb.

There is another reason why 3D printed limbs make sense for kids – they are not designed to be hidden away or to act as camouflaged replacement parts. They are not about disability. In fact they suggest the reverse; a sort of superpower! Imagine a Raptor Hand, a Transformer Limb, an arm to match a favorite outfit or even a fluorescent, glow in the dark arm!

Faith Hill lost her left arm when she was just 9 months old. Now at age 7, she gets to pick the color of a custom made prosthetic arm – a ‘robohand’ created by the Build It Workspace, 3-D printer studio teaching people about high-tech printers which can then be used for various projects. This is a truly amazing solution for kids like Faith, who would quickly outgrow a hand created for a 7 year old child – a limb made out of the same plastic used for manufacturing auto parts! Faith already taught herself to swim; she surfs with her dad. How she’ll be riding a bicycle. Using both hands!

Similar is the story of Sydney Kendall, who received a cool pink robotic arm. After she lost her forearm in a boating accident at age 6, she tried several prosthetics. This robotic limb cost about $200 as against traditional robotic limbs which can cost between $50,000 and 70,000 is the best, she says!

Dawson was born without any fingers on his left hand. He had problems holding a ball and tying his shoe laces and his parents couldn’t afford a high-tech prosthetic arm for him. The 13 year old now has a cool looking black and blue prosthetic hand that was created by a 3D printer. E-Nable, founded by Jon Schull is a volunteer organization that matches talented makers with children such as Dawson who need prosthetics. The organization does have a wait list, but the possibilities; the hope it holds for kids and their families is vast!

Taking a moment to remember our brave soldiers this Memorial Day (May 25th, 2015) lets envisage the possibilities and the hope that 3D printing technology holds out for men and women in active combat as well as veterans. Those who have lost a limb or suffered disfigurement (as in the case of an IED blast) can hope to regain mobility and that lost sense of self worth!

The possibilities of affordable prosthetic arms or legs, perhaps a reconstructed jaw or a face transplant with the help of 3D printing… perhaps our readers would like to contribute some more ideas?

Denise Resendez is the Email Marketing Specialist at ComboInk.com. She’s a coffee addict, lover of all Pusheen stuff, and proud Aunt.