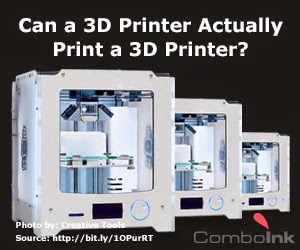 We’ve heard a lot of buzz around 3D printers, but how do they work exactly? We explore that topic today, from what they use to print to what files can be used. Check it out below.

Where a common printer will print text and images on surfaces such as paper, plastic sheets and so on, a 3D printer actually creates three dimensional objects. The output of a regular printer is something you can look at, read or file away; 3D printing creates objects that you can hold and actually use.

How Does a 3D Printer Work?

You probably noticed how in a regular printer, the print nozzles extrude ink on to sheets of paper to create printed documents or images as per the print commands you’ve given. Now in a 3D printer, you would use photogrammetry software, a 3D scanner or a computer aided design package to create 3D printable models to collect information and analyze the shape and appearance of an object.

On this basis, a 3D model of the object is created. This model is then converted into an .STL file which is then processed into thin layers or slices – hundreds or even thousands of horizontal layers depending upon the size and complexity of the object.

This digital information is conveyed to the printer and the print command is given. Now the 3d printer filament – it could be plastic, metal, sand, liquid, ceramic or glass powder, paper or sheet material (amazingly even edible material such as chocolate) – is extruded layer upon layer to create an object.

So you can see the object literally taking shape right in front of you in minutes or hours; depending upon what is being created. Theoretically this printing technology lets us print virtually any geometric feature or shape. The understanding is, that perhaps in the future, you could ‘print’ out a plate and then ‘print’ out the breakfast you want to eat off it.

What 3D printers Can Do Right Now

3D printing is already being used in design, automotive, space, medical and educational sectors. We’ve seen 3d printed prosthetics, toys, clothes, chocolate, educational aids and so on. We’ve also heard of an entire 3D printed car and a $5,000 3D printed house! The number of 3D printing Kickstarter projects in the pipeline points to the undoubtedly bright future of the technology. We are also being told that it is possible to print a working firearm, acoustic guitar, medical models and a whole lot besides. Basically, this genie cannot and will not go back in the bottle.

What Next – 3D Printed Drugs & Explosives?

It sounds like the natural progression of things, doesn’t it? What I mean by that, is that if you have such an amazing invention you can print anything you like, including illicit materials such as banned substances, counterfeit objects guns and explosive devices. Will people be able to print objects with hidden voids for potential smuggling and transportation of such illicit items? Will people be able to simply printout a designer dress or handbag at home instead of buying it; will these printers destroy the world economy? And to take things to their natural conclusion, will we have a 3D printer to print a 3d printer?

Right now, the answer to those questions would be a big ‘No!’ 3D printing technology as it exists today is not capable of cost effective and quick creation of 3d objects. It is slow and time consuming; most existing 3D printers aren’t able to print anything that exceeds dimensions of 12 square inches. The type of 3D printing filaments able to be used, are also limited. Though prototypes are able to do more, a 3D printer that you and I can currently buy and use has many limitations. This technology is liberating to be sure, but currently only small groups of people are able to benefit from it.

What do you think of 3D printing and its future? Do you have a 3D printer or do you plan to buy one? Feel free to share your views in the comments segment.

Denise Resendez is the Email Marketing Specialist at ComboInk.com. She’s a coffee addict, lover of all Pusheen stuff, and proud Aunt.