ComboInk Blog > Ink & Toner > What is 3D printing and how does it work?

The entire concept of a 3D Printer seems rather like something you would see in a Sci-Fi movie – a machine that actually creates three dimensional objects. While a regular printer uses paper to print images, text or graphics on a flat surface, a 3D printer actually creates objects – layered objects made with the help of hundreds or even thousands of horizontal layers. These machines make it possible to create and customize items that are relevant to us and our lives – it does seem a little like magic doesn’t it!

The applications of 3D printing are many: data visualization, product development, rapid prototyping, and specialized manufacturing. These can be applied in various spaces such as architecture & industrial design, healthcare, entertainment, construction, education, fashion, jewelry, geographic information systems and more.  But how does something like this even work? 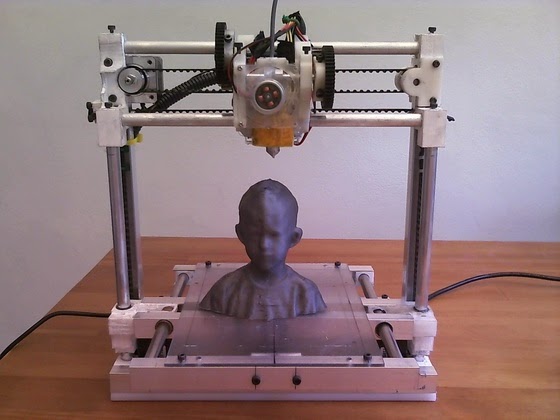 How did the concept of 3D printers come about?

It was way back in 1984 that a fledgling 3D printing concept was visualized by Chuck Hull of 3D Systems Corp: a process called stereo-lithography was developed using UV lasers and photopolymers. It was in the 1990’s that the term 3D printing was first used when MIT developed a process where inkjet deposition of liquid binder on powder was employed.

Additive Layering is the key to creating 3D printouts. There are different methods but mainly it’s about layers being used to create objects; typically the softening or the melting of selected materials to create those layers. The most commonly used protocol in 3D printing is Selective laser sintering (SLS) and Fused Deposition Modeling (FDM). Liquids may also be used and then cured to create objects using Stereo-Lithography (SLA).

Using a 3D modeling program, an object is scanned and a design is generated. The SLS method is where minute particles of plastic, glass, metal or ceramic are used to create layers that generate the previously designed 3 dimensional shape.

FDM methodology was developed in the late 1980’s. The process uses metal wires or plastic filaments that are heated and melted and then moved vertically as well as horizontally through a specialized nozzle to create a shape using a computer aided manufacturing software. The melted material is fused together in the desired shape to get the object required.

SLA technology uses liquids to create solid objects using the process of photo-polymerization. With this method liquid ultraviolet curable photopolymer resin is used along with an ultraviolet laser to generate the layers that translate into a 3D object. UV light helps consolidate and solidify the object created.

The future of 3D printers

3D printing is a fascinating subject and it is only a matter of time before the concept catches with the general population at large –the possible applications in schools, places of businesses and even homes is only now being realized.  The 3D printer space has seen astonishing growth in recent times; the market for 3D printers and services was worth $2.2 billion worldwide in 2012 according to some estimates.

While high end 3D printers could cost hundreds of thousands of dollars, more basic kits for the home could be available for some hundreds as well. Simply put, a time could come where instead of going to the store to buy something; you could use a 3D printer to create it at home from a downloaded 3D model!

ComboInk likes to keep you informed with some of the best industry related innovations and technological developments, and to also offer interesting tips and news updates. To keep yourself informed about the latest updates and  amazing discounted deals on ink & toner, you may want to subscribe to our mailing list and like us on Facebook.